Recently, parents of teenagers who have become addicted to the now fashionable self-harm are increasingly turning to us for help – deliberate self-harm of accessible parts of the body in the form of cuts. Professor Rakhmanov will tell in more detail about such teenage mental disorders in his new book, which is being prepared for publication.

One of these patients completed the first stage of treatment at our Institute.
Katya’s problems (the name has been changed for ethical reasons), the girl’s mother says, began almost two years ago, during the lockdown period, when the school switched to distance learning.
Before that, I had a healthy daughter, she developed normally, she was an excellent student until the 8th grade, she knows English very well. And after a month of distance learning, she began to complain that she did not know how to communicate with classmates, did not want to go to school. It got to the point that he studies for two weeks, then he gets sick for two weeks, feels bad, misses classes.

Katya’s severe depression began after the death of her father. I also experienced the loss of my husband hard, and my daughter became very withdrawn after the funeral.
As an excellent student, teachers demanded a lot from her, she also had to “keep up the mark” in front of classmates, and Katya could not stand such stress … She could not hold a pen in her hands, could not write, she suddenly became afraid of her voice when she answered in class, afraid to speak.

When she heard my voice, she said: “Why are you screaming so loudly!”, Talked to me only from another room. Then she stopped talking altogether, only nodded her head, closed the curtains so that the room was always twilight.
On September 1, when my daughter had to go to the ninth grade, she got ready, got dressed, and told me: “I can’t go to school.” A few days later I got ready and went to class. But at the lessons she did not perceive the teacher’s explanations, then a panic attack began and the teacher brought Katya home. On the recommendation of psychiatrists, the daughter was transferred to individual training.

We turned to psychologists, and Katya didn’t respond to their advice. At first, she did not want to go to the doctor, then she asked herself to go to see a specialist.
My daughter was prescribed antidepressants, at first she felt better, then again she felt bad. They raised the dosage, but Katya got worse and worse, she was afraid of people, and she was afraid and ignored any communication. Among people, she felt bad, chest pain appeared, and panic attacks began. At the hairdresser’s, Katya lost consciousness.
It was a real shock for me when I saw my daughter’s hands – all cut up, not just scarred, but in rough, terrible scars. And I understood why for a long time, even at home, my daughter wore clothes only with long sleeves.

She admitted that she cut her hands with glass from a glass, which she broke specifically for this purpose. And thin scars – from a clerical knife. I took everything sharp in the house and hid it, but Katya continued to injure herself with a pen with a thin sharp paste. When I asked my daughter why she was doing this, why she disfigured her hands like that, she only shrugged her shoulders in response.

Then eating disorders began, Katya got carried away with diets and stopped eating altogether, and after eating she began to induce vomiting. Recently, I didn’t leave the house at all, I bought clothes for her myself. I took pictures in the store, sent her a photo, coordinated what I liked, and what I didn’t, and then I bought it. After another appeal to a psychologist, they told me: “Nothing can be done now, wait until it outgrows.”

The last point for me was the psychiatrist’s verdict — “Schizophrenia. Questionable”. I realized that something urgently needed to be done, that my daughter would not be able to be herself, she could not be left alone, and the pills did not help at all. One of the psychiatrists advised me to contact Professor Rakhmanov.
On the Internet, I read different reviews about treatment at the Institute, but then I called one mother, who had a child with a similar diagnosis, and who was helped at the Institute. We talked for about an hour and the next day I called, signed up for a consultation with Vagif Mamedovich. 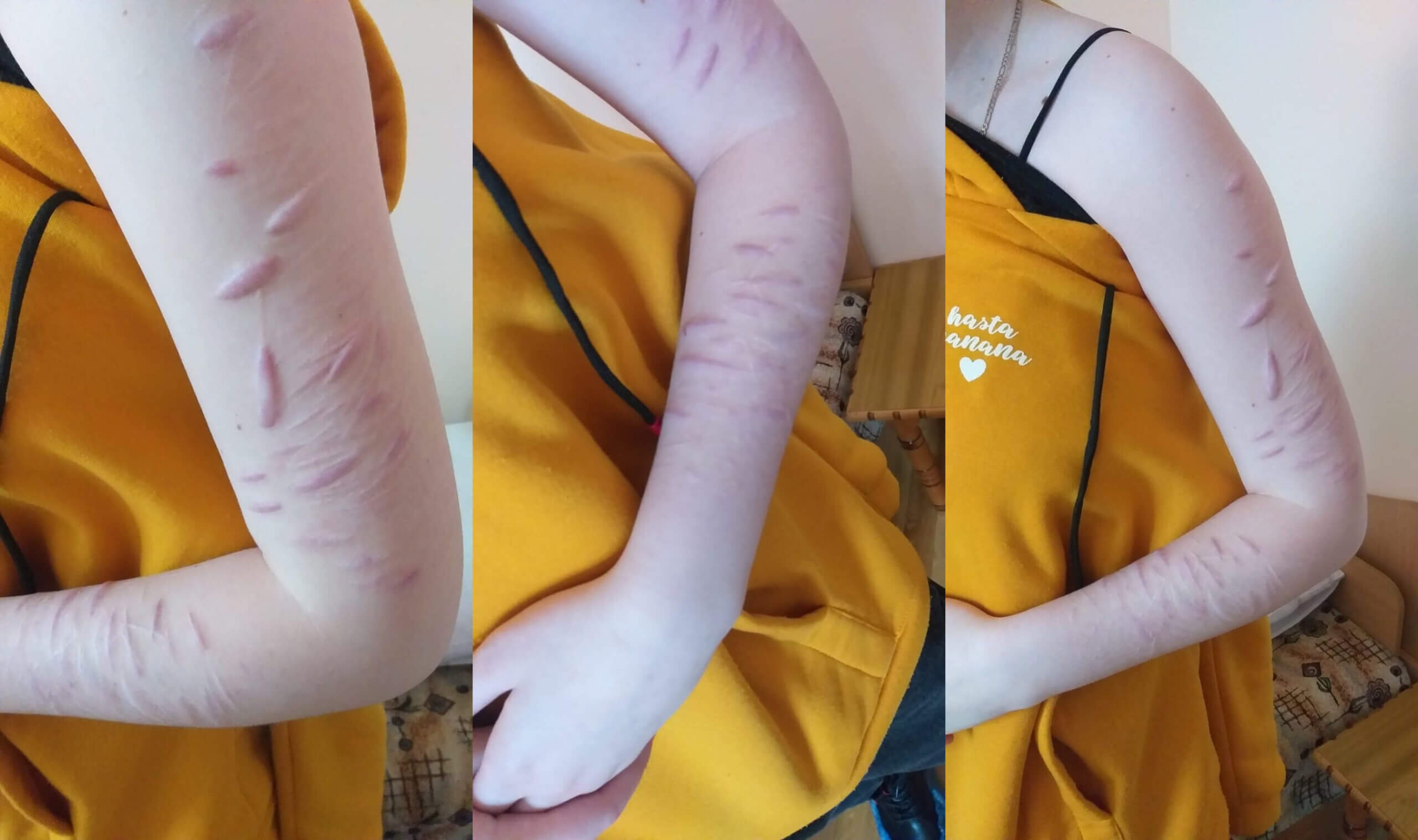 Of course, we changed three times before we arrived, Katya was always ill in transport. To my surprise, already on the fourth day of treatment, my daughter asked me to sign her up for a hairdresser, where we normally got there by minibus. During the treatment, they traveled by transport every day, Katya never said that she was ill.
Here she is a different person, she began to communicate with the staff of the Institute and with patients, and she began to smile, laugh, and show emotions. There was an interest in clothes – she began to choose what to wear. Since we are from other cities, we are forced to go to the nearest supermarket for groceries, she walks calmly, and feels good in the store. I wanted to go to McDonald’s, where I also felt great, relaxed, and didn’t hide from people. And after the treatment, my daughter asked to order a barbecue! She was in a great mood at the cafe.

Thanks to the professor and the staff of the Institute for helping us. We signed up for the second stage of treatment, I want to see my Katya happy and cheerful again. I’m sure everything will be fine with us.
We wish Katya and her mother good health and mutual understanding. May their recovery story end happily and be an example for other teens and their parents. Only now you have to work not only on yourself, on your moral condition, but also on the physical condition of the girl’s hands. Spring is coming and Katya will soon change her long-sleeved clothes for seasonal clothes.

We asked Tatyana Svyatenko, Doctor of Medical Sciences, Professor, Vice-President of the Ukrainian Association of Dermatovenereologists and Cosmetologists, member of the European Academy of Dermatovenereology, Head of the Department of Skin and Venereal Diseases of the Dnipro State Medical University, to comment on the situation:
– Self-harm, which occurs due to auto-aggression, in medicine is called pathomymia. For this purpose, people can apply cuts, wounds, burns, bites to the skin. Pathomymia is characterized by damage to open parts of the body that are easily accessible for injury (arms, chest, legs, face). Pathomimia most often occurs in patients with severe psychopathy, or neurosis, but the patients themselves never seek help from a psychotherapist or psychiatrist, most often the diagnosis is made by a dermatologist, who sends him for a consultation with a neuropathologist or psychiatrist.

Another subspecies of self-harm is dermatomania. This disease can be of several types:
– onychophagia – biting off nails and cuticles;
– intentional hair pulling;
– cheilomania – biting the tongue and lips.

Most often, in people who are in a stressful situation for a long time, all types of dermatomania are observed simultaneously. The main symptom of the disease are scars of various shapes on the skin. Relatives may notice that patients who are prone to self-harm always carry sharp and cutting objects with them.
It will not work to return the skin to its original smoothness after numerous cuts. Most often, after self-harm, whitish normotrophic scars remain, which do not disappear completely. If dark, dense scars remain on the body, their size and brightness can be reduced with the help of cosmetic procedures, physiotherapy, and preparations for home scar correction.

A more accurate diagnosis can be made by a doctor. He will examine the places of damage, determine the type of scars and offer the best scheme for their elimination. Self-medication is not worth it.

Share page in social networks:
Sign up for a free consultation
View on the Google Map:
Stoletova 17-A,
Dnipro, Ukraine
Treatment reviews
Elective mutism, disorders of social functioning. Mom Irina. Kharkiv, Ukraine
Mom Irina and daughter Vita. Kharkiv, Ukraine
My already 15-year-old daughter has elective mutism. She speaks only with a limited circle of people – in our case, with relatives and children – her peers. Doesn’t speak to outside adults at all. Plus a bunch of all sorts of fears, mostly far-fetched. Plus hyper-shyness and dislike for personal...
Read full review
Read other reviews