Alyosha was well remembered by the medical team of Dr. Rakhmanov’s institute, the diagnosis was hydrocephalus, the condition after coma (post coma state). When we brought Alyosha to Professor Rakhmanov for treatment, he did not perceive the speech addressed to him and did not speak himself, did not eat himself, did not know how to bite and chew, did not respond to his name, despite his age, wore diapers, did not know what it was to ask to the toilet, because he did not feel this need, he ran, fingering the air with his hands in front of his eyes as if he were swimming, did not know how to play with toys, could not be near children of the same age and generally perceived the world around him in a distorted light. It was. 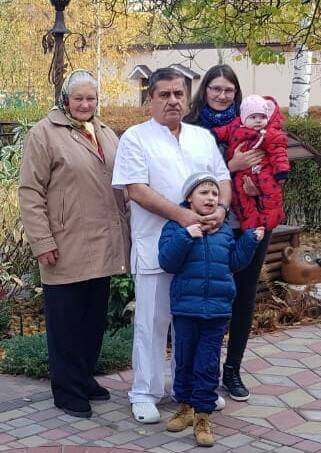 Photo for memory. Alyosha with his grandmother, mother, and little sister Emilia with Professor Rakhmanov before the child was discharged from the clinic.

But now this is a different child. The boy seemed to be replaced. He learned a lot and can do a lot, and most importantly, he understands the environment and perceives it adequately. In other words, it responds correctly to stimuli from the surrounding world. Not long ago we could not even think about such a transformation of our son, his reincarnation, and we simply cannot remember this period without tears.

A month after birth, Alyosha suffered a massive hemorrhagic stroke and intraventricular hemorrhage. The child was in a coma for six days. The doctors considered it necessary to make a radical decision – to disconnect the child from the artificial respiration apparatus!

The child’s head was struck, and the completely unformed brain took the blow. It is not known what will happen to the child in the future. I lived in intensive care, next to the child. I prayed all the time. She expressed breast milk and poured it into the baby through a tube. And she prayed again, asked the Lord God to have mercy on us. Then I did not think about the consequences, I just asked to leave my son with me on the ground. She asked me to keep him alive! I could not imagine how I could live without this quivering lump of my flesh further and could not imagine what was ahead of me. God had mercy on me. My son survived.

We arrived in Dnipro when Alyosha was 2 years and 3 months old. All that time I did not sit still for a day, not a single minute. After discharge from the hospital, endless massages, exercise therapy, swimming, classes according to the Doman method, and so on and the like began, which is difficult to explain to a person who did not survive such grief. I did most of the above at home myself. The results seemed to be, but rather imaginary. Minimal, seeming.

The child slept 20 minutes a day, he had a constant headache, he beat against the walls, the floor, against my body. He was recumbent, did not know how to sit, play with toys, did not recognize anyone, because of the atrophy of the optic nerves, he could not distinguish the environment, did not perceive sounds. The boy ate only breast milk. Any other food in him caused excruciating vomiting. The stomach reacted to such feeding with constipation and pains, pains, pains. I saw how he writhed, how convulsions penetrated him. I felt his pain with my own nerves. In the bed lay a beautiful blue-eyed cupid, doomed to silence, immobility, and suffering.

My husband and I continued to torment the doctors. The MRI recorded a terrible picture every time. I don’t want to recall the doctors’ predictions once again. They were ruthless.

Imagine my everyday state. Nerves, like ropes on a ship in a stormy ocean, are constantly tense to the limit. I don’t know how I got through that difficult period of my life. Of course, none of the doctors ever undertook to treat us. Someone advised to send the child to a boarding school, someone advised giving birth to a second, already healthy child. I categorically rejected such advice. I could no longer imagine my life without this little creature, doomed by me to suffer.

Vagif Mammadovich became the last hope for me. I have heard a lot about his methods and successes in the fight against various severe childhood ailments. Frankly, Vagif Mammadovich responded negatively to my appeal. He did not undertake to treat Alyoshka. And I understood him perfectly. It’s too hard a case in medical practice with an unknown outcome. It is clear that every person, every specialist, in such a situation, first of all, would have thought better than getting involved in such a story with an incomprehensible outcome. My husband and I literally persuaded him. Dr. Rakhmanov is a man with a kind heart and not indifferent to the grief of others. He loves children. Sick and suffering all the more. His clinic is a shelter for little people deprived of fate.

At the first stage of treatment with Professor Rakhmanov, literally on the fourth day of our stay in the clinic, Alyosha began to react more or less meaningfully to toys and take them in his hands. On the tenth day, he sat down himself. By the end of the first stage of treatment in Vagif Mammadovich’s clinic, my son felt support in his legs. He took a few more uncertain steps. But he did it himself, holding on to my finger.

And no less important is that Alyosha began to eat small, small, almost microscopic, passerine portions of ordinary food. I cannot convey my joy, my happiness. Words are not enough. I was inspired by these achievements of the doctor. I, even more, believed that my son would live and grow up as a normal person. Others did not believe me.

I remember that I spoke to the audience of the Parents School. I was bombarded with questions. There were many doubters, unbelievers. But the success of treatment, success, albeit minimal, in mental and emotional development, were. No one can deny this today.

Alyosha first perceived all objects by touch. I did not see my relatives, I looked only at the bright light and light-musical toys. Now we are presented with partial atrophy of the optic nerves, the further state of vision is questionable. The child sees, but we do not know how well, because he himself cannot tell us. We hope for the best in this matter too.
What else I consider necessary to note. The child has not had constipation for a long time. But we, in fact, until 3 years old, without an enema and glycerin suppositories, could not go to the toilet on our own “for big business”.

Alyosha now eats ordinary, not “blender” and pureed food. And this is also a great success. He knows where his plate is, where food is heated, where his favorite jam is, without which he will not swallow even a spoonful of porridge. The child shows what he wants, leads where he needs. He still cannot always ask to go to the toilet, but God forbid not to remove his plate from the table! And all this without medication. These are all the techniques and practices of Professor Rakhmanov.

We have achieved the sea of ​​everything thanks to a person who lives and breathes our children, our achievements, does not spare himself for our sake. This is not just a doctor, this is a professor, scientist, philosopher, thinker. He writes methodological literature for parents and medical workers, writes books and scientific works, has awards, orders, and most importantly, international recognition. It is recognized by the medical luminaries community. A man cannot achieve more with his activity on earth. Everything that we have achieved, I owe this extraordinary person! I bow to him!

And the struggle for the future of our child continues. I will give everything for his health and well-being, I will do my best to make him better and better over time.
Alas, as people say, when trouble has come — open the gate. Our child had little brain hemorrhage already at the first breaths after birth. We, his parents, have seen the insidious consequences of this grave illness. But this, as it turned out, is a small part of what has befallen our child. We noticed that Alyosha suffered from epileptic seizures from time to time. We again underwent a deep medical examination. We did a new MRI scan, conducted night video monitoring, consulted with epileptologists, passed the necessary tests … After seeing the results of our MRI, the epileptologists sounded the alarm and urgently sent us for a consultation with a neurosurgeon!

So the problem of urgent shunting arose. As I understand it, this is the most difficult operation. You won’t wish that to your enemy. The epileptologists themselves, when they deciphered the MRI results card, were horrified. Compression hydrocephalus. It is she who gives the child endless fits of seizures, a severe headache. According to doctors, the only way out of this catastrophic state of the child should be bypassing surgery. This is the only chance for us. The brain can and should “straighten out”, the child will begin to develop, the headaches will go away. The child will continue to develop normally.

Alyosha was consulted by four prominent neurosurgeons. Their conclusion confirmed the previous diagnosis – compensatory hydrocephalus, replacement. This means as we were told, the fluid-filled those voids and lesions in the head formed after the stroke. The child has lived with this for nine years. His brain has “adapted” to this position and condition, and it is difficult to predict how the specialists will react to surgical intervention. The general opinion of doctors is that the risk of the operation is huge, its final result is questionable. None of them risk operating on their son. All our hope is for the detailed consultation of specialized specialists in the world.

I remember when we first came to Vagif Mamedovich, Alyosha really suffered from the consequences of hemorrhage and hydrocephalus. He slept 20-30 minutes a day, banging his head. She hurt him terribly. When we arrived in Dnipro when the child began to receive treatment, he took a course with Professor Rakhmanov, he began to sleep, and his headaches gradually disappeared.

It was all there. This “charge” was enough for Alyosha for one and a half to two months. Then we drove to Vagif Mamedovich again. Again they turned to him for help. Gradually, the intervals between treatment cycles were increased to 10 months. But, apparently, this was not enough. At the same time, we know that this was the only technique that could help us and relieve a child’s suffering. 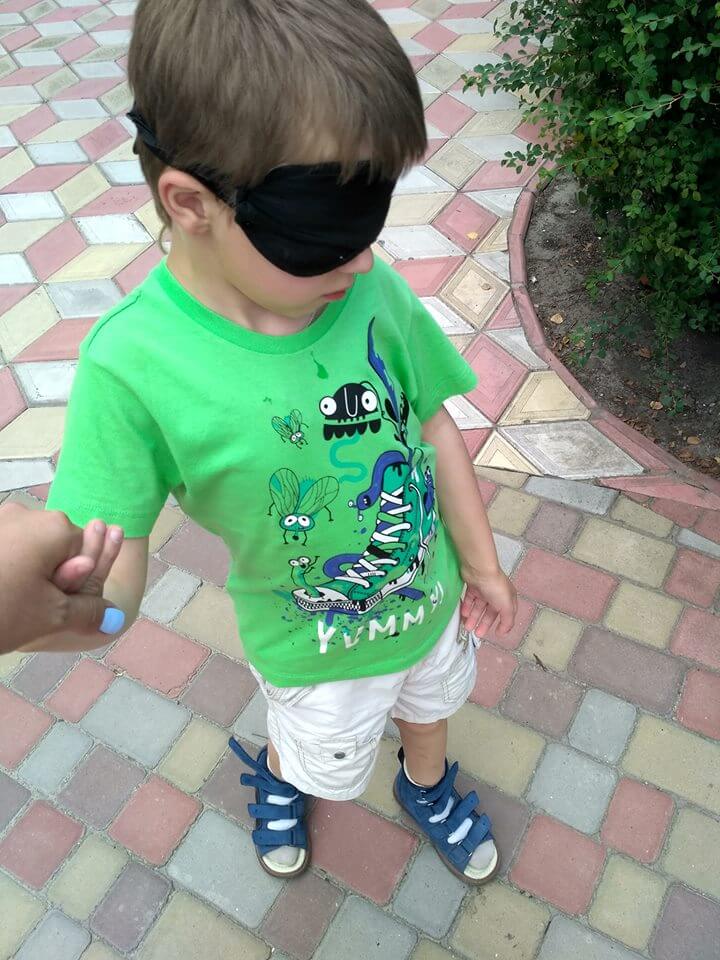 And this is also gratitude to our wizard — Doctor Rakhmanov.
For his hard work, for his faith, the hope that inspires people, for the love he gives to our children.
He forever became a wizard for us and a dear, close person.