Good day! My name is Natalya, I am the mother of the girl Nastenka. In August 2019, my 2.5-year-old girl was diagnosed with grade 3 sensorineural hearing loss, the hearing threshold was 70 dB. This means that she did not hear the speech range at all (20-50 dB), so there was no development of speech. At that time, the child only said: mom, dad, we parents could not communicate with her, talk, she did not like it when they read books to her (then I understood why she just did not hear us…).

When we learned about such a diagnosis, the earth went out from under our feet … I went through all the psychological stages from resentment, anger at the whole world to accepting the diagnosis. Oceans of tears, constant from despair, that it cannot be treated (so all the doctors said). Doctors told me to come to terms, put on hearing aids, and learn to live with them. We all did just that. But my heart, all equal, was torn to pieces, dressing the child with SA every morning, seeing a strong lag in speech development. At work my colleague — a friend wrote the full name of the professor and said this person is dealing with your problem, I could not believe it, because the information that I found, the doctors told me – it cannot be treated! And I began to read a lot of reviews on the Internet, all kinds of reviews … I went to the consultation with great doubts about the result, but with confidence – I must try!

Today we are finishing the third cycle. After the first cycle, the audiogram showed 67 dB (before treatment – 70 dB). Nastya began to speak the words that we had learned, put them into small sentences: where is dad? etc., hail to the name appeared at a distance of 1-1.5 m. The process has begun.

In the classroom with the deaf teacher, she repeats all the words, listens, she was always praised. During treatment on the second cycle during the ISA procedure, I began to notice that the child would repeat the words after me when I periodically walked with her by the hand. At home, after the treatment, she began to notice even more that Nastenka reacted to the call at a greater distance (about 2 m) and more words appeared. You can build a small dialogue with the child with yes / no answers. She listens to the speech, repeats words, repeats sentences, she loves when books are read to her. Now she herself takes books and runs after her parents – read … read. Auditory attention and perception improved markedly. There was no opportunity to make an audiogram due to quarantine, but it was clearly evident that there were improvements. Before the third cycle, we nevertheless made an audiogram and we are given the 2nd degree – 55 dB.

We are very pleased with this result, the treatment works!!!! MANY THANKS TO PROFESSOR!!!!

I believe that thanks to the treatment, my child will hear this world in full sound range, which means that my girl’s speech will be correct and beautiful!
Below is a photo of the audiogram before the second and third cycles, respectively: 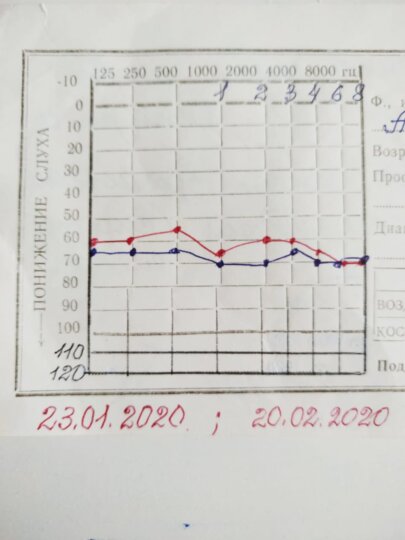 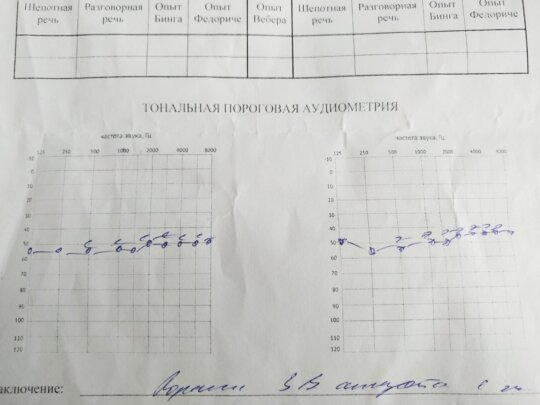 Share page in social networks:
Sign up for a free consultation
View on the Google Map:
Stoletova 17-A,
Dnipro, Ukraine
Similar reviews of the treatment
Chronic bilateral sensorineural hearing loss grade 3 and 4 (deafness)
Inna, Artem's mother, 3 years old
The child grows up active, cheerful and kind, but one problem is that he does not hear. We spent almost two years in hearing aids, and one and a half years of classes with a deaf teacher did not bring the desired results ... In 20 days of treatment, Artyom's hearing improved by 10 dB. Opened up new horizons in bone conduction ...
Read full review
Hearing loss 3 degrees
Marina, Nelly's mother. Kyiv, Ukraine
Good afternoon everyone! At 3 years 8 months, he was diagnosed with grade 3 hearing loss (presumably due to lingering jaundice at birth) and a strong recommendation to wear a hearing aid. We did not accept such a decision of the specialists, we found Professor Rakhmanov, and after 3 days...
Read full review
Auditory neuropathy, hearing loss 2-3-4th degree
Mom Olga, Odessa, Ukraine
In December, my daughter and I underwent the first course of treatment with Dr. Rakhmanov. Before treatment in Dnipro, they were examined at the Regional Children’s Clinical Hospital, two private clinics, and an ENT institute. The diagnoses were different: auditory neuropathy, hearing loss of the 2-3-4th degree. Here is such...
Read full review
Read similar reviews